Orient Electric was founded in 1976 by Teak and Darrell Parnell and Fred and Jane Kirchhofer. After Darrell and Teak married, they bought out Bjur Electric, Darrell and Fred’s former employer, and renamed it Parnell Electric. Then, in 1976, they moved the company to the small community of Orient, Oregon, and renamed it Orient Electric. Since Fred was an excellent electrician, they asked him to be a partner in their business. Together, they built this business from the ground up through their hard work, honesty, fair prices, quality workmanship, variety of wiring options, and special skills in industrial wiring. Over the years, the business has developed a large customer base and is well known in the area because of its excellent reputation.

Darrell’s daughter, Lynn, took over his portion of the company, and when Fred retired, his portion was divided into three parts, one of which went to his daughter, Kassandra. In 2012, Mike Opray bought the company. Today, Lynn and Fred’s grandson, Rick, still work at Orient, as do Mike’s three sons: Clint, Jake, and Luke. Orient still operates with the same family style structure as when it was founded and stands by the same standards as Darrell and Fred have had since the beginning. 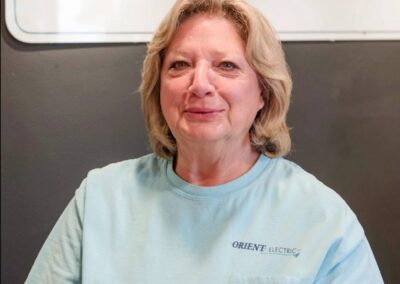 We back our work with a 100%
Satisfaction Guarantee.